A British family are spending lockdown in an idyllic bamboo house in Bali after making a last-minute decision to book a one-way ticket as countries began to shut down.

Corinne and Dave Pruden, 39 and 49, along with their twin toddler sons, flew out on 16 March after booking a ticket from London to Denpasar earlier that morning.

Eight days later the UK went into lockdown, with the closure of non-essential shops and restrictions on movement.

"We found this house on Airbnb and we were offered a really, really good price and we were totally isolated, we're in the middle of rice fields. We thought it was totally perfect," Mrs Pruden told Sky News. 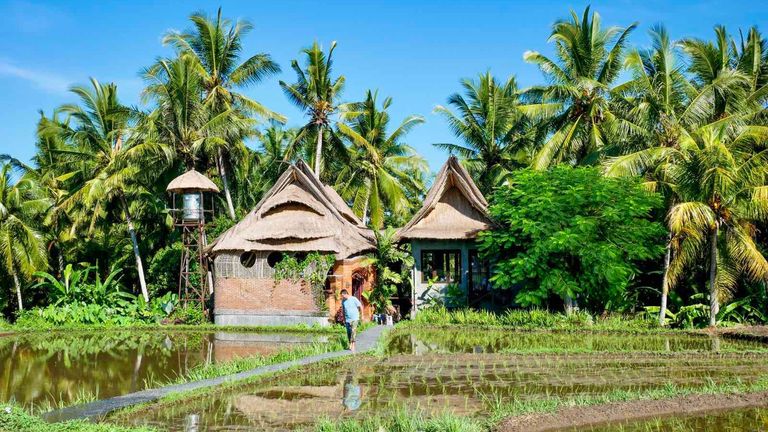 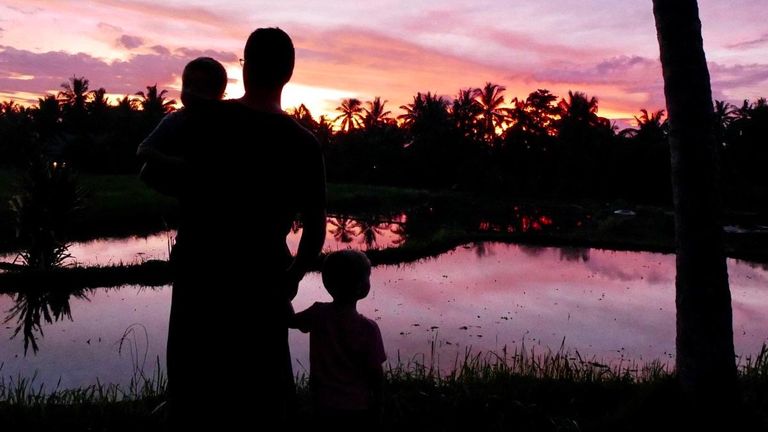 Image: The family is staying in Ubud, Bali. Pic: twintastic_nomads/Instagram

"We bought a blow-up pool and so the boys play with the hose and they jump in the pool every day.

"We just walk and there's all these streams the boys can play in. So every morning we go out for walks through the rice fields, and then in the evenings we often go out for a walk and watch the sunset.

"Then we watched the moon rise yesterday evening, so we're trying to connect them much more to nature."

The family have been living in Budapest for five years and own a coffee shop there, but found their takings were plummeting as coronavirus restrictions began to be imposed.

They had been planning to visit friends in Central America and then go backpacking for several months.

"We had spent about six months preparing for it, so we had rented out our apartment in Budapest, we had set the business up with two managers, we had set up all these changes so we could logistically not be back for six or nine months," Mrs Pruden said. 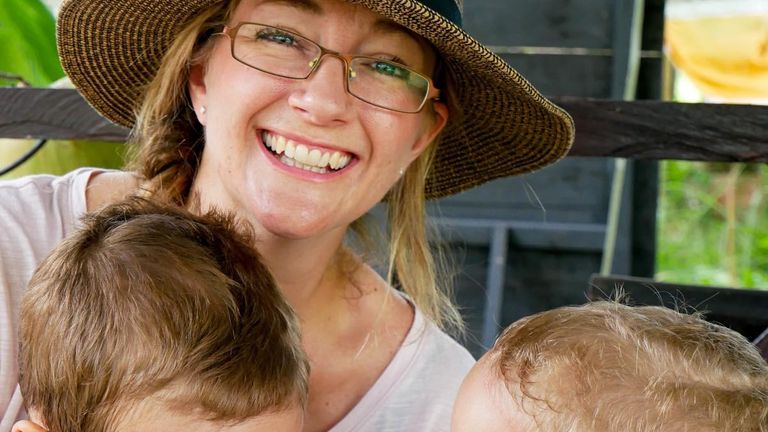 Image: The family have been going on walks and watching the sunset. Pic: twintastic_nomads/Instagram

They were staying with family in the UK when the US ordered a foreign travel ban - meaning they couldn't take their flight.

"So we thought, we're at our parents' in the UK which is a safe, nice environment, we could return to Budapest where we're healthcare covered, but there was something about us that thought 'we need to go to a happy place, somewhere that's good for us and good for the boys'.

"The only three places that were open to us were Brazil, Thailand and Indonesia.

"We just wanted to find an area that was relatively normal that we could spend the next however long with [the boys] in nature surrounded by nice people, and we decided that Bali was probably one of those places that we can do that."

"We had to pack, we had to travel two hours from the south coast up to Heathrow, we had to dump our rental car in the wrong location and do all of this in a really short period of time."

The family flew to Brunei, where after six hours they managed to board a plane which only had 16 other passengers.

"It was a really strange feeling because we were doing the opposite of what everyone was doing," Mrs Pruden said.

"The other people taking flights were returning home and we felt sort of courageous but perhaps being a little bit stupid or naive - it was quite hard to pigeonhole our actions and emotions and it was quite stressful." 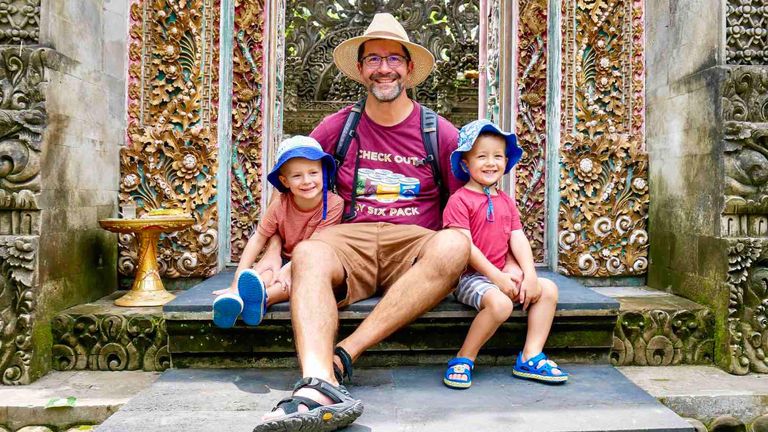 Image: The couple are trying to help their children become connected to nature. Pic: twintastic_nomads/Instagram

Indonesia has the most coronavirus-related deaths in Asia outside of China, reporting a total of 469 deaths as of Wednesday.

A British tourist on Bali was one of the first deaths reported in the country.

Academics from the London School of Hygiene and Tropical Medicine estimated in March that as few as 2% of Indonesia's coronavirus infections were being reported.

The family first stayed near Denpasar, but found there were "too many people on the streets" and "nobody seemed to be taking care of anything", so decided to move to the quieter location of Amed on the northeast coast of Bali.

But when the village chief imposed a three-day total lockdown - with residents unable to leave their homes for food or supplies - the family chose to move again to their current location in Ubud. 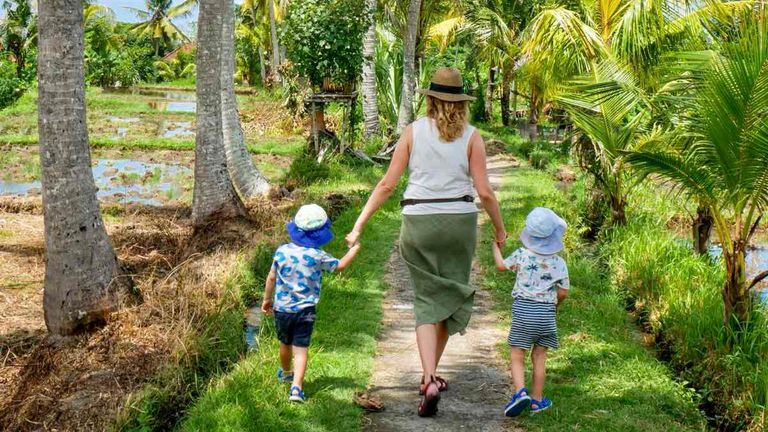 Mrs Pruden says the family have only gone into Ubud twice and are staying mostly secluded in their bamboo house, where they are receiving fruit and vegetable deliveries from a Michelin star restaurant.

The 39-year-old added that her two-year-old sons have been asking what is happening.

"We've explained that a lot of people are getting ill, we've just put it in terms they can understand. We've just said people are getting a bad cough because we don't want to scare them at all and so we have to be careful of what we touch," she said. 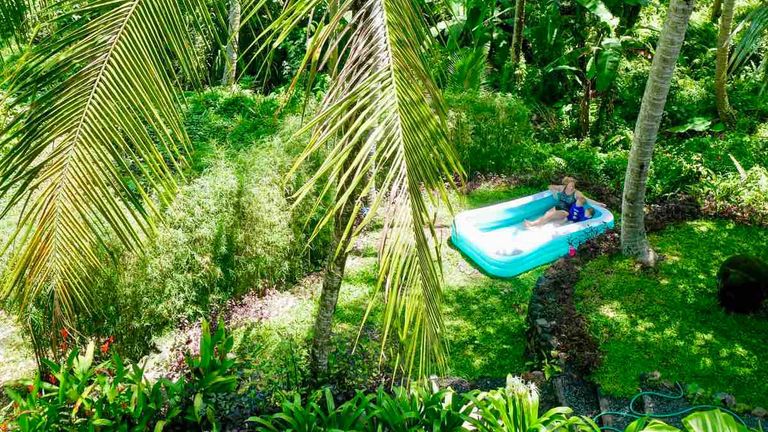 Image: The family have bought a blow-up pool. Pic: twintastic_nomads/Instagram

Mrs Pruden said the coronavirus pandemic is "really quite scary" and her 72-year-old mother has been in self-isolation in the UK for three weeks.

"When I talk to her, I feel her fear and then I watch the news and read the news, it's not a nice situation at all and we are luckily removed from it - to the point where if we didn't talk to our family and we didn't watch the news, we really wouldn't be aware of anything happening here because we're so isolated with this house.

"Whenever we get in contact with the real world, we see it's pretty scary."

More than 12,000 people with coronavirus have died in hospitals across the UK, including 778 new deaths announced on Tuesday. 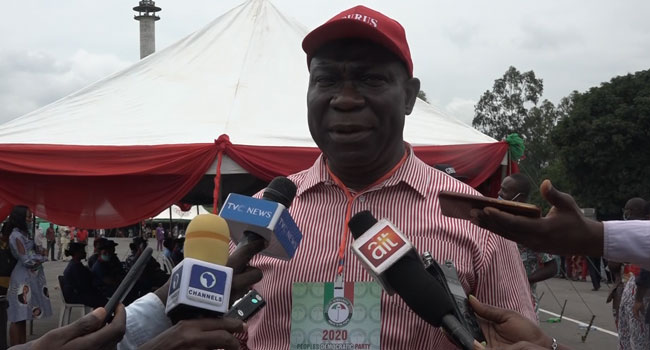 Crisis In Edo State, An Embarrassment To Nigerian Democracy – Ekweremadu